Community at its best at Ruddington Village Market

Previous Next
Community at its best at Ruddington Village Market

Last month we visited Ruddington, a large village five miles from Nottingham with a host of indie shops, local history museums and a country park. In 2019, the village launched its own street market and we went along to celebrate the market’s first birthday.

We met with some of the organisers and spoke to market traders and shop owners to find out more about how the market started and what benefits it has brought to the village.

It was a great visit and really reminded me of the heady days of starting out when I was one of the founders of Chatsworth Road market, in Hackney back in 2010. A year in and the Ruddington team are running a slick operation, but you don’t ever quite forget the early mornings and hoping that both the traders and customers will show up!

Ruddington Village Community Partnership (RVCP) was formed in April 2018 after the sudden closure of a long-established family greengrocer and with a butchers shop struggling to stay open, which prompted an extraordinary meeting of the Parish Council, with 140 people attending. Here the local businesses and residents volunteered to help with protecting the traditional shops that added to village life.

With a remit to support the high street economy by encouraging more residents and visitors to use the village centre, the partnership formed five working groups, one of which looked at the feasibility of setting up a market.

By September 2018, planning was underway to start a market. The team behind Ruddington Village Market is a collaboration of volunteers and local businesses with three main organisations – RVCP (lead), Ruddington Parish Council and The White Horse Inn where the market takes place. In addition, Ruddington.info, the local website run by Graham Wright supports the village with marketing via updates on shops, markets and community news.

RVCP recruited traders via social media, its own website and local marketing efforts with flyers around the village and on Ruddington.info. Launching with approximately 20 stalls on Saturday 2 February 2019, RVCP estimated that over 1,000 people visited the first market.

The market runs from 9 am until 12.30 pm on the first Saturday of the month. Ruddington is an established family-friendly village and with many residents also having dogs customers are up early. The opening hours also enable people to buy food for breakfast or lunch and allows the pub and the car park to be fully open for the afternoon.

The market sells crafts, produce and food from more than 30 stalls. There are also branded tote bags at £3, which contribute towards funding. 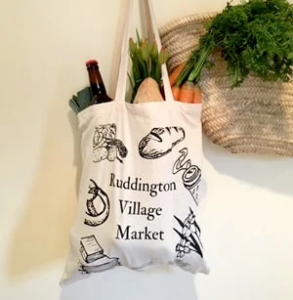 To help cover the loss of the greengrocers, the market ensured there was a fruit and veg stall, run by one of the volunteer organisers. The stall is still going but is now run by The Bottle Top, a new village shop.

Stalls are available in the pub car park, in a large gazebo attached to the back of the pub and inside the pub to create three distinct areas to wander around. Pitch fees range from £15 to £25 per market with electricity available (quite a luxury at markets). There is one charity stall at each market, provided free of charge.

The market has been a hit from the start and has succeeded in its original aim of encouraging local people to use the village more. In May 2019 a postcode survey showed that 70% of visitors to the market were locals, with the remainder travelling from surrounding villages (20%) and further afield (10%) from as far as Derbyshire and Leicestershire.

Having started out with 20 stalls and an estimated 1000 people at the first market (in itself impressive!), a year on the market has 37 stalls taking over extra rooms inside the pub. With a live music stage outside showcasing young performers there was also street magic and a birthday cake, created by a local café, of course. PR consultant and volunteer Louise Third runs the press and communications for RVCP and had secured great coverage locally and beyond with ITV Central filming at the market for their Saturday news bulletin. 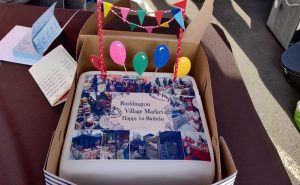 There was a great atmosphere and it was really apparent that people meet their friends and neighbours there. With a covered gazebo and rooms inside the pub (which is open), there is more protection from the weather than at most markets. It also wasn’t street food dominated, there were individual, high-quality crafts and produce to take home which better suits the village.

We met trader, Jen Walker of Split Screen Coffee who has been trading from her vintage 1965 camper van since the first market. Using the van as a mobile coffee hatch or bar sees her travelling to markets, festivals and parties/events. Jen lives locally and believes that the market brings a real sense of community to the village, serving as a place where people can meet, socialise and buy products with the monthly date a fixture in their diary. She is also a local councillor and thinks she speaks to more people at the market than she does at her surgery in the village hall. Jen is now looking to expand and is exploring options within the village. 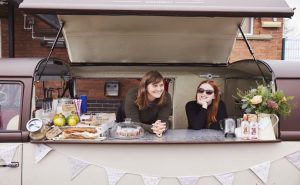 As with many markets, being volunteer-led the team are now far more aware of the time needed to make it happen, particularly around the success of social media and how you can resource it.

RVCP estimate that over the first year 10,000 people have stopped by which is quite an achievement.

…but what about the shops?

The market was set-up to increase footfall in the village and remind people of the shops and services available locally. Currently, there are only one or two empty shops although sadly, the village butcher is closing down having struggled for the last two years. An arcade-style unit is under construction which will house six new shops so there may be some movement as existing shops relocate or new ones open.

A few of the shops had stalls at the market (always a good move if it’s possible to man a stall and a shop at the same time) with The Bottle Top running the fruit and veg stall and Sweetie Boutique, a traditional sweet shop and Black Cat Café also trading.

On visiting The Bottle Top and Ruby Rae, both owners had only positive things to say about the market.

Paula owns independent boutique Ruby Rae and has found that the market has brought in new faces who return on other days of the week which has increased customers. She thinks the village businesses work well together. They have been installing hanging baskets to make the village prettier and she has signed her shop up to the loyalty programme. However, she thinks there’s still work to be done around the opening hours (in the village) as many shops still close early on a Wednesday and a Saturday and hours aren’t consistent.

Reviewing and aligning opening hours can make a real difference to people using local shops. Firstly in them knowing that when they visit, most of the shops will be open (at least core hours) and secondly that the hours suit the customers. It may not happen overnight but it’s a change that businesses can work towards as their individual circumstances allow them to.

Alex, co-owner of The Bottle Top opened in May 2019 having returned to the area. With a background running pubs, she took over the former fruit and veg shop with her husband. Having opened as a ‘bottle shop’ they’ve since added refill options to remove the need for single-use plastic (RVCP have signed the village up to Plastic Free Communities) and fruit and veg to connect the history of the shop with the former greengrocers it was. Alex sits on the committee of RVCP and took part in Maker’s Nights (see below), opening later than usual to encourage people into the village in the evening. They now open until 9 pm on Friday and Saturday with quarterly ‘meet the brewer’ type events with up to 30 people. They are now looking to expand into refill nights (for zero waste products) and workshops.

Wider initiatives have also taken place to encourage people to visit the village from further afield and to return to the shops they discover.

The ‘Ruddy Good Loyalty Card Scheme’ was the first big RVCP initiative with different offers running monthly. To add further weight to it, a partnership was formed with Nottingham City Transport to promote the village within a printed leaflet – A Ruddy Good Day Out – that acted as a guide to the village for those further away but on the bus route.

After launching in 2019, (the same year as the market) and taking place on the longest day (21 June) then again in December preceding the monthly market, Makers Night included approximately 40 makers selling their wares and giving demonstrations to encourage people to visit the village in the evening. The evenings were hosted across three venues with a further nine businesses in the village opening later and hosting events of their own between 6 pm and 9 pm.

YouNG, an initiative run by Trent Bridge Community Trust has just agreed to collaborate with RVCP in launching a young entrepreneur’s programme for the market. With applications open until April, it’s aimed at local Rushcliffe borough residents aged between 16 and 21 years old. One person will be selected to receive training, marketing advice and branding support from experts in RVCP in readiness to run a market stall from August.

On 28 November RVCP is going to be running the Ruddington Christmas Market & Fayre on behalf of the Parish Council. There will be stalls and attractions across multiple streets, indoor, and marquee locations open between 12 – 9 pm. Applications for stalls and space at the Christmas market are already open – that’s being super organised!

I’m looking forward to returning again to see what happens next in the village and how they are working together via their partnership structure to continue to build a thriving market and really connecting people with their high street.

Finally, after a stroll around the market with friends, we left with gin, cake, children’s sweets, a print and some very fancy sausage rolls! All in all it really was ‘a ruddy good day out’.

If you’re in the Nottingham area, the market takes place on the first Saturday of every month 9 am – 12 pm. Visit the market website to find out more about visiting or trading.

Any cookies that may not be particularly necessary for the website to function and is used specifically to collect user personal data via analytics, ads, other embedded contents are termed as non-necessary cookies. It is mandatory to procure user consent prior to running these cookies on your website.